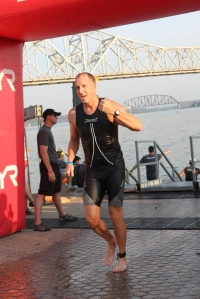 A triathlete told me he is drinking butter coffee before running, his timing has improved and he’s not hungry even after a hard training session. He said the butter coffee he drinks has over 400 calories so he asked me if it’s possible to use fat for fuel. After your body depletes glycogen it will burn fat as fuel, but in this instance he’s adding fat so his body will use the butter by converting it into fatty acids for energy. This may seem like a good idea but most people cannot tolerate high-fat foods before intense exercise. Fitness trainer Bobby Cox has seen this time and again when his clients cannot finish a workout due to extreme nausea from consuming milk, a high-calorie high-fat bar, or other fattening foods. The reason why this particular athlete may not be hungry after training may be because his stomach is bloated from consuming that high-fat beverage.

Numerous studies has shown that high-fat meals, specifically in the form of MCT (medium-chain triglycerides), prior to exercise causes gastrointestinal upset such as cramping vomiting, diarrhea and bloating. In spite of the possibility of having severe stomach pains, this triathlete plans to continue drinking his butter coffee since, in addition to increased speed, he’s lost fat. Here’s some possible explanations:

Based on a compilation of research “…there appears to be no advantage to feeding high-fat diets to athletes…” “…Endurance performance is much better on the high-carbohydrate diets..” and “carbohydrate is more readily digested and absorbed” compared to fat, which means carbs provide faster energy. (93)

Per Sports Medicine About.com “Fat is slow to digest and be converted into a usable form of energy (it can take up to 6 hours)” which is why MCT instead of LCT fatty acids has been studied in sports. MTCs are digested almost as quickly as glucose (94).  “For these reasons, athletes need to carefully time when they eat fat, how much they eat and the type of fat they eat. In general, it’s not a great idea to eat fat immediately before or during intense exercise.” (3)

If you want to improve performance, have carbs pre-workout so you have energy to complete your workout. You should eat some carbs every 90 minutes of continuous exercise so you don’t bonk. For long sessions, consume carbohydrates with a small amount of fat during exercises lasting over four hours (93); Don’t forget to consume protein and carbs with a small amount of fat post-workout. The post workout meal is extremely important as this meal works to repair the damage and rebuild muscle. It also prevents you from exhaustion later in the day. Make sure to eat enough calories from lean protein, vegetables and good fats on a regular basis. Building a strong healthy body is a daily task. Lastly, take a minimum of one day a week off from exercising to recover. By following these steps and adding strength training, an athlete can make definite improvements in his or her sport.